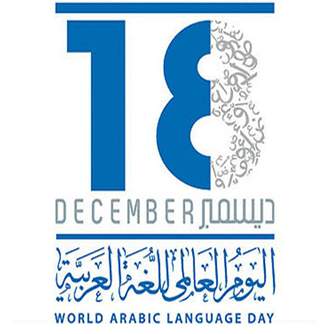 A significant day in the universal calendar is of December 18th, 1973 when the United Nations General Assembly approved ‘Arabic’ as an official UN Language.

Being one of the earliest languages that man has communicated with; today, nearly 300 million people across the globe use Arabic as their native language; and, Classical Arabic – an earlier version of Modern Arabic – is the liturgical language used by 1.7 billion Muslims across the globe.

Arabic has immense contributions in the field of science, culture, philosophy, arts and etcetera. There are many famous books of the language such as: The Epistle of Forgiveness (Resalat Al-Ghufran), written in 10th century by Abul ʿAla Al-Maʿarri and focuses on divine comedy with its deep philosophy and brilliant language; Chronicles of Majnun Layla and Selected Poems by Qassim Haddad, a complex and layered lyrical love story; The Prophet by Khalil Gibran, which has been translated into 40 different languages, deals with the topics such as life and human conditions.

Last year on this day, Ms Irina Bokova, Director-General of UNESCO said, “The Arabic language, in its classical form and its many dialects, is a global language in which the identities, beliefs and aspiration of peoples across the five continents are expressed”. Also, she condemned the fields of higher education and scientific research that disseminate the Arabic language online saying, “UNESCO wishes to recall the importance of multilingualism and knowledge of languages in an increasingly globalized world; greater efforts must be made in schools and universities to diffuse the Arabic language and consolidate its learning with a view to the development of research, scientific innovation and creativity. The dissemination of the Arabic language throughout the world is a source of tremendous energy for cooperation and peace: let us join forces to release its full potential”.

If we take a look at the modern Arab Literature, one of the latest contributors in promoting Arabic is Samia Bazzi. She worked as a professional translator nearly for 15 years and since last 13 years she’s teaching translations and different branches of linguistics at Lebanese Universities. In her book ‘Taste the Arabic Proverbs’ she has translated the famous Arabic proverbs into English, explaining their meaning and contexts.

A recent government initiative – Bil Arabi, however, aims to maintain the prominence of the Arabic language by promoting its use on social media. Because, almost 90 percent of UAE residents use Facebook, WhatsApp and other social media on daily basis the initiative could prove a success. Bil Arabi is expected to involve events and campaigns in the following year, which would be targeted to the young generation. Meanwhile, UNESCO hosts a two-days’ workshops and roundtables focusing on how the technological advances could be used to teach Arabic, its future and its relationship with science.

We hope that the Arab literature keeps expanding; and for this purpose Austin Macauley strives to contribute further, welcoming all the readers with its collection, and provides a platform to the aspiring authors.