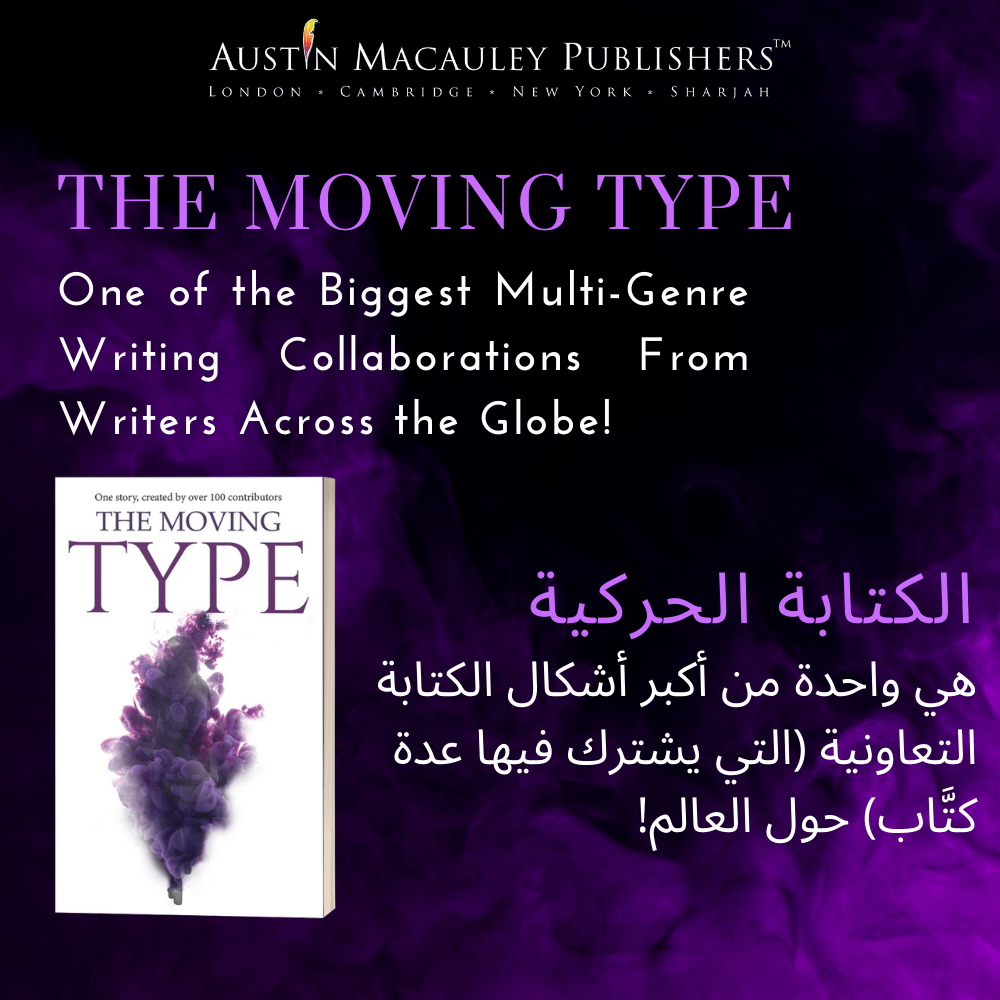 Releasing on Thursday, The Moving Type is unique in storyline written by over 100 contributors from around the world. Created amid a global pandemic, the strongest chapters were born from the toughest times.

The Moving Type was a project coordinated by Devika Sharma, a marketing professional from Dubai and took six years for The Moving Type to move from a concept to a year-long digital collaboration between writers from the UAE, Australia, UK, Canada, India, USA and more.

Due to the nature of the narrative, The Moving Type takes readers through a journey of adventure, thrill and romance following the main character Nadia, who becomes unwillingly entangled in the pharmaceutical corruption of Lifalabs, after receiving cryptic messages from an anonymous source when a virus continues to spread across the city of Matana. Taken against her own will, Nadia becomes the test subject of a grueling medical trial and is injected with a deep purple dose of Budlyt-19. With friends turning to foes, loyalty turning to betrayal and antidote turning to obsession in a capitalist pursuit of Matana, will Nadia ever escape the hands of corruption? Or will the colour purple stay true to its meaning of wealth, power and ambition for the corrupt?

The idea for a relay-style book struck Devika Sharma when she was in university, still finding her feet and playing with the idea of becoming a writer, or a publisher/editor. But as luck would have it, she found a way to become all three.

It took six years and a lockdown in a pandemic for The Moving Type to move from a concept written on the back of a ‘Fundamentals of Finance’ textbook to a year-long digital collaboration between writers from the UAE, Australia, UK, Canada, India, US and so many more.

According to Devika Sharma, “The key message from this book is simple: The strongest chapters are born from the toughest times. In the midst of a pandemic, it was incredible to connect with complete strangers from all over the world who couldn’t be more different from each other, and yet, here we were creating a beautiful little cocoon that we could escape to by just doing what brings us unparalleled happiness and purpose.”

Devika praises the unique characteristic of the book as each chapter carries its own style, its own agenda, its own voice. Even if there wasn’t a big heading separating each chapter, you would immediately be able to tell that a new writer has begun working on the story. In theory, this seems like a potential disaster but it was fascinating to see how the storyline could pass from one writer to the next seamlessly.

The book has been written by many authors from all over the world. Authors of The Moving Type have come forward and shared their experience of contributing to this book. One of the co-authors of this book, Zaha, a soon-to-be graduate of English and Cultural Studies said, “Since childhood, I have had a passion for writing. Whenever I had the chance, I would write short stories and poems. It became a goal of mine to share my work publicly. When I found out about this project and read the first few chapters, I was intrigued by the mystery of how the story was unfolding and how I, myself, would push the plot forward. The idea of people from all around the globe building a story together was so thrilling that I jumped at the opportunity to be a part of it!”

Talking about how she felt about writing only a chapter, she said, “At first, I approached this project with excitement at the idea of writing one chapter of a larger novel. However, once I sat down to write, I began to feel constrained. Secondly, I felt stressed to not only be carrying a plot further, but at the realization that I was paving the way for the next writer to build off my work. To ensure that my chapter flowed smoothly from the previous, I noted down key themes and character traits so as to not create any plot holes.”

Furthermore, she added, “The previous authors had already done such a fantastic job of creating an ominous and mysterious tone throughout their chapters. I was especially fond of the themes of survival and discovery. Therefore, I tried to carry those themes out in my chapter.”

Another incredible author of this book, Elisabeth Ten Cate, was also asked why she opted to become involved in the project. She added, “During lockdown, my world felt a lot smaller than usual, so I felt a craving for interactions beyond my usual network. The idea of working on a story with a group of random strangers sounded great.”

Talking about how she felt by writing only one chapter, she added, “I read the previous chapters and took notes. There were a few points that had been touched on in previous chapters but weren’t developed further, so I wanted to reference these to make them feel deliberate and not overlooked.”

When asked about the themes she envisaged when pulling through to her chapter, she said, “I wanted to refer back to things that had been mentioned in earlier stages of the story so that they felt deliberate and I wanted to add something that would make the plot appear less black and white.”

Elizabeth is from the Netherlands but has lived in London for the last seven years. She studied philosophy, worked in marketing and communications for a few years, and is currently training to become a UX designer. Her primary goal was always to become a published novelist.

Another talented author, Julia Malone, was interviewed and told that she wanted to be involved in this project because she loved a creative challenge. Writing is her solo hobby, and with the pandemic, she has been spending a lot more time alone than ever before. This opportunity gave her a wonderful way to collaborate with creatives around the world, as she stretched her writing skills to co-produce a work built by the varied unique imaginations of many.

When asked how she felt by writing only one chapter, she said, “Writing only one chapter was exciting. I had no idea how it would influence the narrative moving forward and reading each week to see how strands were woven together from the ideas of each author was a wonderful interactive journey to go on. To make sure the chapter flowed through from the previous, I picked out key character details and expanded upon them, like Tara’s social media presence. I asked myself, how could this be a part of the story?”

Julia Malone has majored in English at the University of Toronto, exploring many different areas of literature. Julia has been teaching third grade for four years and has started up a Microfiction after school club for a number of creative students at her school.

Talking further about her experience, she told, “One of the big themes I saw pulling through to the chapter I’d written was that of isolation. We have e obvious isolation of characters in a lockdown, unable to meet in person, but we also have the stark sense of isolation that is apparent in the characters’ video calls as they try to grasp on to a piece of each other’s lives and find that each seem so futile. Ron tries to escape his isolation through video games and Tara does much the same through her social media following, reaching out to hundreds of others, trying to connect while they all feel lost in the unknown of the pandemic. Adi and Nadia seem to be lucky to have each other at first glance, but we soon realize that the two cousins know little of what’s truly happening in their personal worlds. Adi’s isolation comes out through his desperation for control which sends him down a possibly controversial path, thereby influencing Nadia’s fate.

From there, the story takes off! How do these four characters deal with their sense of isolation? How does it influence the plot? This theme seemed timely to explore and I’m eager to discover how it may or may not have influenced the conclusion of the book!”

Jeremy, one of the co-authors of The Moving Type, was also interviewed. When asked why he wanted to be involved in the project, he said, “I hope to one day become a novelist; it has been my dream for the last 12 or so years, I had written this during a time when I was uncertain about this dream being within reach. However, I did this for fun too, to see what would happen!”

Jeremy also shed light on writing only one chapter and how he made sure it flowed through from the previous, he shared, “I had read the previous chapters which gave me an idea of what could happen next. That’s part of the fun, crafting the unknown, a scenario that is up to the interpretations of the beholder! For me, I took inventory of how the characters were feeling, and where they were. It then became a matter of improvising and planning where to take it from there.”

Jeremy also gave an insight into his background. He said, “This is quite an extensive one. I have just graduated from a course I didn’t particularly want to do, having had to pick it because my original choice (English Literature) required what I did not have.

I am deaf, born to divorced parents with a love for books and a dream to be a full-time novelist someday. Currently, while I wait to start my masters, I am working by submitting manuscripts to agents and publishers. I write dystopian, mysteries and drama.”

We also got the opportunity to talk to Leanne Price who took part in the project, she said, “I’ve always loved writing and wanted to push myself during the pandemic. Seeing that this was for a good cause made it even better! I felt nervous writing only one chapter, but it was amazing to see how one page could change even the genre of the story. I wanted to show character development and emotions through a very tense scene. I wanted to show themes of friendship and science fiction, my personal favourite in books!”

One of the co-authors of this book, Matt Fudge who has written a chapter in the book shares his thoughts as well. He said, “I wanted to be part of this project to get my writing out there in whatever way I could! Writing one chapter was odd; it felt like sending my baby out into the wild, not knowing what the rest of the writers would do with my character and the plot ideas I’d set up. I connected my chapter to the previous ones by just looking into one character that hadn’t really been touched yet, so that it was both continuous and progressive. This is definitely the first thing I’ve had published, so even if only one little piece of it is mine, it’s cool to be a part of. I really tried to talk about loneliness in my chapter, and the effect it has on people who can’t escape it.”

Another co-author, Rebecca Steele added, “The idea of working together with various people across the globe to create a story was exciting. It was something good in a pandemic where so many things were uncertain and so much negativity was in the air!”

The credit of coming up with such a grand concept goes to Devika Sharma. Unique in storyline and creation, this book project was written and illustrated by over 100 contributors from around the globe. It is a must-read book and we’re sure you would not want to miss out on this one, in the collaborative nature of the book all proceeds will be donated to the Lions Club. You can grab a copy of this book here.