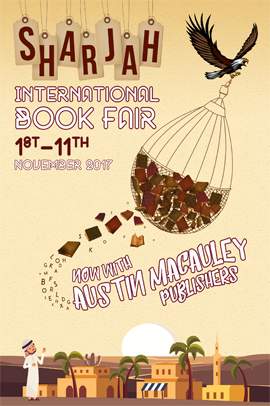 Sharjah International Book Fair (SIBF) is one of the largest book fairs in the world, the most prestigious in the Arab world and home to the most exciting literary event in the region. The main aim of SIBF is to encourage reading among people, especially the younger generation, by making quality books accessible to them at affordable prices. In 2013 the prestigious publication “The Bookseller” named SIBF as one of the top four books fairs globally.

SIBF is held under the patronage of His Highness Sheikh Dr Sultan bin Mohammed Al Qasimi, Member of the Supreme Council and Ruler of Sharjah, who strives to promote literacy, reading and the preservation of culture in the emirate. Through his vision Sharjah has been named the Islamic Culture Capital in 2014, for its unparalleled contributions to the preservation of heritage and culture.

Running annually since its inception, SIBF attracts millions of visitors from around the world, hosts some of the biggest names in publishing and the cultural sphere and organises hundreds of events over its 11-day duration. The 34th edition of the SIBF in 2015 saw participation from Egyptian actor Mohammed Sobhy, Irish writer Darren Shan, BBC and Sky TV presenter and writer John McCarthy, Nigerian Booker Prize winning writer and poet Ben Okri and Indian actor Mohanlal.

Visitors can enjoy a wide range of activities during the fair with many events geared specifically to children. This ranges from writing workshops to poetry readings, book signings, international and local author sessions, as well as plays, arts and crafts activities. SIBF even hosts a Cookery Corner, where renowned chefs demonstrate their very own recipes and present tasty dishes.

In 2016 there were 1420 publishing houses from 60 countries exhibiting at SIBF and over 1.5 million books in 210 languages on display. It received 2.3 million visitors firmly placing the emirate on the map as a cultural focal point.

Visitors enjoy the fair for the great discounts on all books on sale (25% off the published price), while authors have the chance to meet their readers and interact with some of the world’s best writers, and exhibitors are attracted by the prestigious longevity of the Festival.

The second edition of the joint conference between Sharjah International Book Fair (SIBF) and American Library Association (ALA) was held in 2015 bringing together 255 librarians from 16 countries with expert speakers delving into topics of importance for professionals in public, academic and government libraries.

Other initiatives running at the SIBF include the Translation Grant, a Sharjah Government initiative funding the translation of books for both regional and international publishers, and the Culture Café with poetry readings and cultural events from regional personalities.