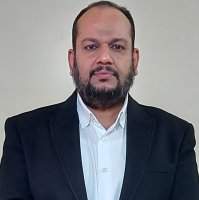 Hamed Saleh is married and has three sons. He was born in the countryside of Baghdad to a father from among the notables of Bani Hamdan, and to a mother from the city of Fallujah, from the notables of the Albu Issa tribe. He is one of eleven brothers and sisters in his family: Five males and six females. He is the second elder son in the family and the third child to be born in terms of total number of brothers and sisters. The author grew up in a family with an upbringing that respects and combines between religion and tribal customs. His life changed drastically when he reached the age of eighteen, at which time his father died, and a series of very harsh incidents began to confront his family. Immediately after the father’s death, the Kuwait War began, and Iraq was under severe economic siege. The author’s youngest brother had a burning accident, after which the author, his older brother and their mother took care of him for three years in hospitals and at home. During those years, one of his sisters died in an accident, and she was a single young woman. His mother could not bear those misfortunate accidents, and it got even worse with the difficult economic situation, therefore, she suffered from a serious chronic illness for four years. The author took care of her with his older brother until she died. Immediately after her death, the American occupation of Iraq began. The author and a friend of his were subjected to the bombing of American planes. His friend was martyred, and the author survived after being wounded (may God heal him from his wounds). His younger brother was killed by occupation and sectarian incidents. The author was exposed to many other misfortunate incidents that cannot be mentioned under the circumstances. Since the death of his father, he and his older brother have taken on the responsibility of the family, and with the circumstances of the siege, the author had to leave his university and went to work in the commerce industry. Later, he lost all his money due to the American occupation, sectarianism and displacement. The author and his family suffered from displacement inside and outside Iraq. The author loves to read and write passionately since his childhood, adolescence and youth years. His readings were children’s stories, poetry, novels, science, art and sports books, and his writings were within this field. Following his mother’s illness and death, his interest turned to religious and spiritual books, obtaining knowledge by listening to religious and prominent individuals in the field of religion. In the past few years, and after the marriage of his brothers, and having their own homes away from the family’s main home, the author isolated himself in his home due to some personal circumstances and the country’s circumstances and spent most of his time reading and writing. The author did not occupy any profession, participated in any group or party because he believes that the reality of his country is in the most part of it, a reality of injustice where administrative corruption prevails, and he decided not to take part in that. Since 2008, the author decided to record his writings on regular basis for the purpose of publishing, then in 2015, he converted most of his writings into short letters, which became his style of writing since that date. In 2020, the author decided to publish his writings to all people for the purpose of advice and benefit, God willing.