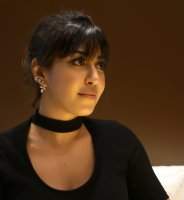 Ansar Ahmed, a multi-talented artist, a mix of east and west from the heart of Bahrain (Manama), she inherited graphic arts skills from her father, and passion of writing from her mother. • A writer and photographer since childhood. • She started photography in 2006, then, she improved her skills in 2009 through her work in Gulf Weekly newspaper. • She was invited to hold her first photography exhibition in Bavaria in Nuremberg city (Germany) in 2010, where she presented a project about photographic series of the formal rise of Bahraini women from ancient times to the present day, the project has achieved a great success in the state. • She moved to live between Frankfurt and Edinburgh in 2011 to start the path of developing photography techniques in institutes, and during this period she re-wrote in a stronger way, she also started writing short stories with the help of German writer and photographer Stefan Derenbach. • She returned to Bahrain in 2013 to settle down, and retired partly from photographing to focus on writing, and transferred her profession into animal welfare and rescue in BSPCA Animal Welfare Center. In 2018, she has decided to officially participate with one of her works, Wanderers of Nostalgia, her first literary work to share it with the audience.